As of this week Kombiverkehr KG is expanding its range of services between Germany and Trieste with ferry connections to and from Turkey and Greece.
| More
Tweetle
Etiketler: greece intermodal kombiverkehr train triste turkey 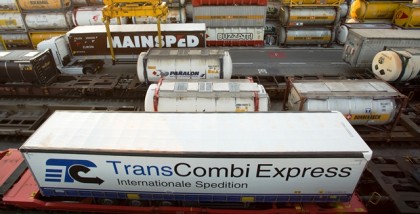 An additional direct train departing from Trieste for the BASF CT terminal in Ludwigshafen ran for the first time this Tuesday. An additional train from the Rhine-Neckar region will run in the opposite direction every Saturday with immediate effect. The existing delivery and dispatch days are unaffected: Monday and Thursday in Ludwigshafen and Wednesday and Saturday from Trieste respectively. The Frankfurt-based company is planning to increase the frequency of services to five weekly round trips on this important route with effect from autumn 2017.
After launching a fourth weekly round trip on the München-Riem – Trieste v.v. route in May 2017 (Fridays from Munich, Tuesdays from Trieste), Kombiverkehr will now be boosting the frequency of services to five departures a week in each direction. The starting date for this is 5 July 2017. The additional train capacity should be able to absorb the increased volume of traffic with Turkey and Greece on Wednesdays from Munich and on Thursdays from Trieste. "The majority of Turkish forwarders have always transported their shipments by road, but more and more of them are considering the advantages of linking modes of transport. By increasing the frequency of services on both routes, we can provide existing and prospective customers with additional capacity for more than 200 trailers and containers a week," comments Peter Dannewitz, Sales Manager at Kombiverkehr, on the extended range of services.
Since the bulk of consignments on the Trieste trains comes from the Turkish ports of Pendik, Ambarli and Mersin or is transported there, the new Trieste trains start and finish in the port of Trieste in the terminal operated by Samer Seaports & Terminals Ltd. The change of terminal means that it is now possible for most consignments to be transferred directly between train and ferry within the port. Kombiverkehr still uses Europa Multipurpose Terminals (EMT) to provide end-to-end multimodal transport, including ferry transport to and from the ports of Haydarpasa and Alsancak in Turkey, and to and from Lavrio in Greece. The Turkish port of Cesme is integrated into the southeast Europe network via the Trieste Intermodal Maritime Terminal (TIMT). All departure dates and detailed timetables for the above services can be found in the online timetable information on the Kombiverkehr website.