Port of Rotterdam to built wind farms at sea

The Port of Rotterdam is creating space for an offshore centre for wind energy at sea, decommissioning (the dismantling of oil and gas platforms) and the oil and gas market.
| More
Tweetle
Etiketler: port of rotterdam 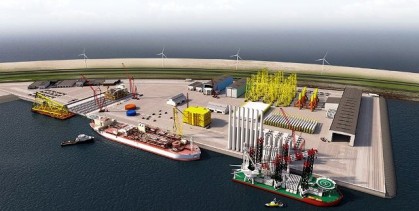 To this end, a new port site of up to 70 hectares is being created using the hydraulic filling technique on Maasvlakte 2 in the Prinses Alexiahaven. Definite interest in the new centre is already being shown by businesses. The Port Authority expects the first companies to move in within two years.
Huge growth market
The creation of Europe’s first offshore centre reflects the Port Authority’s policy of pursuing the growth of Rotterdam’s cluster of businesses in the offshore and maritime sectors, which has developed strongly right from the start. ‘The creation of wind farms at sea is a huge growth market. This requires a specialised port area for the installation and maintenance of the farms, which we would like to provide. This is consistent with our efforts to be the offshore hub of Europe and play a leading role in the energy transition,’ says Allard Castelein, CEO of the Port Authority.
The Port Authority believes it is important for the existing cluster to continue developing, so that the expertise that is present will remain at the same high level and new economic activities will be attracted to the city and the port. The establishment of the centre, right next to the sea on deep water, allows a number of activities to be clustered and businesses to benefit from each other’s presence.
70 hectares of land, 1,600 metres of quay
Offshore Center Maasvlakte 2 (OCMV2) will be located in Princess Alexiahaven against the seawall, near the berth of the Pioneering Spirit. It will be a centre where leading businesses work together in the offshore wind, decommissioning and oil and gas markets with activities such as construction, assembly, heavy lift, logistics, mobilisations and demobilisations. In both offshore wind parks and decommissioning, the coming years hold plenty of opportunities. With OCMV2, the port can now react in good time and tie the expected growth in offshore to Rotterdam.
The Port Authority will make a start as soon as possible on reclaiming the first 30 hectares and installing a heavy load deep sea quay, initially of 600 metres, with the necessary infrastructure. The plan is that the first businesses will become operational on OCMV2 in the course of 2019. The Center could potentially be extended by a further 40 hectares and 1,000 metres of quay wall.
Offshore in Rotterdam
Rotterdam has long been a leading port for the maritime industry. There are some 900 businesses active in this sector there. This position is based on shipbuilding and the oil and gas sector. For some time, offshore has been a policy focus for the Port Authority, with wind energy and decommissioning as key areas. Among other things, this has led to the completion of the Pioneering Spirit and the establishment of Sif (a company specialising in the production of wind turbine foundations).
In this connection, a number of Rotterdam businesses also signed a manifesto last year for the formation of the ‘Rotterdam Offshore Wind Coalition’. The next step is the development of Offshore Center Maasvlakte 2.