Haber »  Dünyadan »  A Woman in a Floating Men’s Club

A Woman in a Floating Men’s Club

Captain Robin Espinosa is one of the few female captains on the seven seas. Living in the male-dominated world at sea has never been a problem for her. The most important thing to have is nautical skills – especially if a container ship has to rescue the crew of a sailing yacht. Here, the Captain reports from her way up and on the bridge.
| More
Tweetle
Etiketler: captain robin espinosa 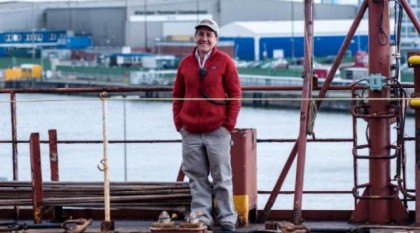 I think that, as a woman, I’ve always had to work harder than the other officers and crew members, but that’s okay. As a woman on board, you have to earn respect. It’s been that way my entire career, and I’ve never felt it was a problem.
Jacques Cousteau and my uncle Billy are to blame for my going to sea. The famous researcher and marine biologist Cousteau, because his work inspired me to pursue a life on the ocean. Like him, I wanted to research marine life, such as dolphins and whales. It was the period shortly after the Vietnam War. At my university, they were looking for people who wanted to go to sea as officers because there was apparently a shortage. Even women were allowed for the first time. I asked my uncle Billy – a seaman who was notoriously brusque – whether I could manage it. “Of course,” he grumbled.
The pay was good, and the prospects, too. What’s more, one could also supposedly switch back to science at a certain point. And if Uncle Billy, the tough cookie, was convinced I could do it, then what could go wrong? I signed on, and found myself just a few days later on board a ship headed to Panama. I was the only women in my cohort.
I was lucky with my first captain. His name was John Woods, a Dutchman and a true gentleman. He was friendly and patient, and he made me feel welcome on board. He had confidence in me – and that was important, especially at the beginning.
I love my job, and maybe that’s the main reason why the dream of Jacques Cousteau was over and I nevertheless went to sea. I like being out on the open sea, when the coastline vanishes on the horizon. When a sense of peace and calm settles over the ship. It’s like that for almost all seafarers on board; it’s like the ship breathes deeply. The smell of the sea, the vastness, the sky at night – it’s simply special if you appreciate such things.
Over the decades, I’ve crossed many seas and seen countless ports. In Colombia, I witnessed uniformed men shoot dead in the port a man suspected of theft. They raced behind him in a jeep with a mounted machine gun and simply took him out. A human life didn’t mean much in this port, and we only left the ship if we had to. In Long Beach, the third engineer fell into a tank and broke several bones. It was hard to rescue him from the depths. A fire broke out on board one time during bad weather on the Pacific, when the cargo ignited by itself. But we quickly had it under control. 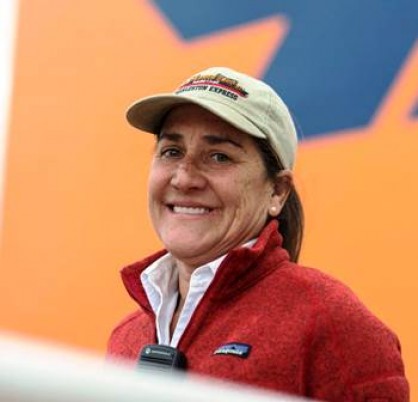 I’m frequently asked what it’s like to be the only woman among men. “No problem,” I say, and it’s been even easier since I became a captain. But, even before that, I hardly had any bad experiences. Maybe because I ignored some things. Instead of letting any of this affect me in the first place, I just concentrated on my job. I only had a problem once with a chief engineer who treated me poorly and completely misbehaved whenever he drank. He insulted me, he was obscene, he made inappropriate advances. I confronted him in front of the entire crew – even the captain was present – and called him what he was in my eyes: a worm. After that, I never had another problem. He left me alone.
My favorite port is my home port: Charleston, South Carolina. That’s why it’s something special for me to sail as captain of the “Charleston Express.” I also like San Francisco and its spectacular approach. I’m less thrilled about Shanghai, with its traffic, smog and cursing on the radio. I’m always happy when we cast off there.
’m currently sailing on the route over the North Atlantic, from the U.S. East Coast to Europe. The North Atlantic has a bad reputation, and deservedly so. It’s really impressive how high the waves can get, especially in fall and winter. But we’re kept informed about weather conditions at all times, and advised by a service that recommends the best route to us. Back in the day, it must’ve been an adventure to cross the North Atlantic. In contrast, we always know what to expect, and can avoid the worst storms.
My dramatic story at sea happened in November 2002 on the way from Puerto Rico to Jacksonville, Florida, when I was an officer on the “CSX Discovery.” We’d received the “Mayday” of a regatta yacht named “Summer Heat,” which had gotten into serious trouble after several storms. Even the mast had broken off. The coast guard had located the yacht. The captain of another cargo vessel refused to come to the rescue because the swell and the storm seemed too intense to him. The coast guard forced him to, but his attempt to help failed so badly that the crew of the yacht asked that he not make another attempt.
Our captain didn’t hesitate – but it was a tough situation. How were we supposed to take the crew on board in these waves without damaging or even sinking their yacht, which was only 12-meters-long, as a result of our maneuver? Day was already turning into night. And, in the darkness, it would be even harder – if not impossible – to rescue the three crew members and a dog.
Nevertheless, our captain, a man named Hesse, assured the sailors via radio, saying, “No problem. We can handle this.” As a captain, you sometimes have to exude sureness, even though there isn’t any. He observed the wind and wave direction, steered as close up to the “Summer Heat” as possible, and had the engine switched off. We slowly drifted up to the yacht. It was a dangerous maneuver as, without the engine, we also placed ourselves at the mercy of the waves.
My job was to help the yacht’s crew members get on board via a Jacob’s ladder that had been let out. But the waves were too high. The yacht repeatedly slammed up against the side of our ship. Minutes passed. Time was getting short, as it would be dark soon. “What if we opened the pilot door?” I thought before relaying the idea to the bridge via radio.
My idea met with approval, even though it was dangerous. Under rough seas, a lot of water can ingress through the open hatch and stream into the engine room. I told the yacht’s crew to prepare themselves, and then we opened the pilot door. Besides me, two volunteers stood at the ready.
The first of the shipwrecked to be saved was “Jammer,” a 16-year-old cocker spaniel. Then we managed to pull on board the sailors, two women and a man. The skipper had a hard time, as he had to leap and he was very afraid. We took on a bit of seawater during this operation. I was relieved that no one had slipped, lost their grip or been washed away by a wave. It would have meant certain death. 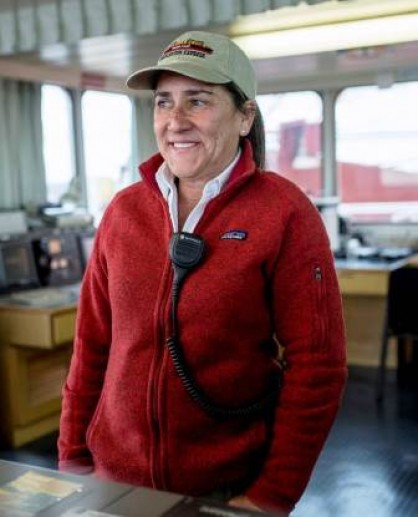 In the days that followed, TV stations like CNN reported on what we’d done, and we received the “Arthur B. Hanson Rescue Medal.” But, more than anything, we were happy that all the crew members could leave the ship healthy in Jacksonville.
Does a female captain react differently than a male one? Hard to say. The nautical craft is the same for everyone. People tell me I’m a good listener. I don’t have any problems reaching my officers and my crew. Believe me: The men listen very closely if I say something.