Haber »  Lojistik »  Turgut Erkeskin: The greatest expedition of all times

Turgut Erkeskin: The greatest expedition of all times 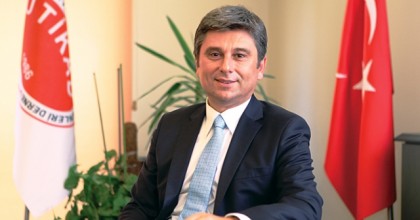 “We have traversed more than 100,000 li[1]of immense water spaces and have beheld in the ocean huge waves like mountains rising in the sky, and we have set eyes on barbarian regions far away hidden in a blue transparency of light vapours, while our sails, loftily unfurled like clouds day and night, continued their course as a star traversing those savage waves as if we were treading a public thoroughfare.” This is the text that appears on a Tablet erected by Zheng He in Changle, Fujian, in 1432, according to Louise Levathes, the author of “When China ruled the Seas, the Treasure Fleet of the Dragon Throne, 1405-1433.”

Zheng He was clearly proud of his achievements and thankful to his beloved Tianfei, the goddess protector of the seafarers. Born Ma He from a Muslim family of Hunan, he had managed to defend his patron, Zhu Di, Prince of Yan, so effectively from his position in Beijing to contribute to making him the Emperor of China, after the conquest of Nanjing in 1402. Zheng He was surely not a man who could sit idle or limit himself to contemplating the crowds from the windows of the imperial palace. He took to the seas and became one of the greatest admirals of all times, by organising and leading seven successful expeditions to South East Asia, Arabia and East Africa between 1405 and 1433.  Zheng He's first voyage departed on 11th of July 1405, from Suzhou, and consisted of a fleet of 317 ships holding almost 28,000 crewmen, but this was far from being a warfare machine. Zheng He generally sought to attain his goals through diplomacy, and his large army awed most would-be enemies into submission (source: Wikipedia).

I wonder what Zheng He would have said about the Belt and Road initiative launched by China in 2013. This is a complex programme embracing infrastructure development, finance, defence and diplomacy working with a huge number of interfaces all over the continental platform embracing Asia, Europe and Africa. From some points of view the spirit is one and the same as it was in 1405, but from other points of view this contemporary “expedition” is quite different.

“The One Belt and One Road [OBOR] is a national comprehensive strategy, which not only has political wisdom, economic benefits and military security, but also embodies the vision of common development and common prosperity.” This is the holistic evaluation that Shao-quing Tang, Dong-quing Liu and Xi Xie of the Business and Communications Universities of Beijing have written about the OBOR initiative. Some have described this initiative as a modern attempt to revive the “Silk Road” of ancient memory, but this endeavour is actually much more comprehensive than that.

China is now one of the leading powers in the world and perceives its role in the global dimension quite differently from other countries. The continental dimension of China, its population and resources allow a unique perspective that others probably may not even conceive, i.e. the “continent” for China corresponds to Asia, Europe and Africa, considered as a single continental platform, where it is important that “common development” and “common prosperity” is made possible by “economic benefits and military security” enabled by “political wisdom”. In order to make this dream come true, one must start somewhere and the Chinese decided to start where it matters most, i.e. building infrastructure.

So we can say that the Belt and Road initiative is in actual fact a strategy, a “new method to upgrade a rebalance China’s economy”, and even more: “it is not a purely economic project, however related to political and military, diplomatic and other aspects. It is necessary to take into account the political and economic interests which are involved in the peace and stability of the world.” Strategically, this initiative, which consists of several geographic itineraries and modes of transport, has different aspects:  it will greatly diminish the importance of the Malacca Straits on China’s logistics routes, create reasonably comfortable access to the largest markets in the world and open China’s enterprise to the only other large inexpensive labour force in the world in Africa. In particular the use of Gwandar in Pakistan as “domestic” port and the rapid rail connections to Europe will end the Malacca Straits nightmare.

Some have argued that this is a new kind of colonialism, or a “Chinese Marshall plan”, but this is a very superficial way of looking at this strategy. Chinese people never actually looked at their communities scattered all over the world as “colonies”, nor have they ever decided to “conquer” countries or regions in order to exploit their resources. My impression is that they have a sense of co-existence which makes it possible to share in the economy and its resources for the common good. In particular in Central Asia the three “NO’s” policy put forward by President Xi in his visit in Kazakhstan in 2013 may satisfy some questions that resist in this area, which is perceived as politically unstable: in developing their relation with Central Asian countries, China declared its intention “not to interfere in the internal affairs of Central Asian countries, not to seek regional affairs dominance and not to operate [a] sphere of influence.”

The Central Asian area of the initiative is quite crucial from many points of view. Primarily these countries have borders with China, and the “boundaries between China and Central Asian countries are all delineated and there is no political problem that is difficult to solve”, in addition we are at the centre of the highly energy intensive area of Central Asian gas and oil, China being the second consumer of these commodities in the world, and, last but not least, “to strengthen [the] cooperation with Central Asian countries is conducive to China’s northwest frontier security.”

One could argue that such a gigantic infrastructure programme looks like a colossal, imaginary bridge to bypass India.  This is actually not the case.  It is actually an infrastructure that is meant to bypass some pretty visible geographical limitations, the Himalayas and the Malacca Straits, but it is surely not mean to circumvent India, which is the second largest country by population and will overtake China as the most populous country in the world in 2024. The connections that the southern itineraries of the OBOR initiative make possible will surely enhance the opportunities for China and India to develop their relations with greater opportunity to flourish than in the past. Respect for the cultural differences that is enshrined in the OBOR initiative will be the key to its success, in India and elsewhere.

Another argument could be made on which should be the role of Turkey in such grandiose strategic programme, considering Turkey is geographically only present on one of the different itineraries.

In this regard we may get help from Riza Kadilar and Erkin Ergueney of China Institute Turkey (CITAM). They state that this could be “the biggest infrastructure project for years to come”, but that “the Turkish public is relatively unaware of the extent of the initiative”.  These are not easy times and political choices are taken sometimes in unpredictable ways through swift moves, whilst building infrastructure takes time and conscious planning. This being said, despite the fact that the Middle East and the Caucasus are not “a haven for stability”, much can be achieved, if we think of Turkey’s strong economy and organisational ability. Turkey wants to have “a stronger influence on the region’s development”, the opportunity offered by the OBOR initiative being a kind of blessing in the making for this ambition.  “By providing employment and growth to the host countries’ economies, the OBOR initiative will ensure sustainable growth and a general increase in living standards.”  Turkey should also consider the risk of being bypassed if it does not show sufficient enthusiasm, as the north of the Black Sea can be reached by the OBOR itineraries without transiting Iran and Turkey.

The historic role of Istanbul as key transit area between continents will come to a new light especially if we remember that China and the Eastern Roman Empire (Istanbul, then Constantinople was its capital) were already in contact in the first part of the previous millennium and trade was flourishing between the Mediterranean and China on the “Silk Road”, a complex network of trading posts and roads that connected the two extremes of the continental platform until the so called discovery of America.

If these ideas had not yet persuaded the reader, quoting Murat Kolbaşı, DEIK Turkey-China Business Council Chairman, may complete the task. We can observe that “OBOR has played an important role in the world economy for years by emphasising the repetition of history”; Mr Kolbaşı suggests considering that “OBOR’s territory will include more than half of the world population in the next 100 years, thus being uniquely important in terms of economic, cultural and social interaction now and in future”, so Murat Kolbaşı believes that this area will come to the foreground again.

Clearly the Chinese will require skilled local manpower to complete this colossal infrastructural programme and Turkey is well placed to provide both hardware and software to achieve the goal.  Turkey may wish to curb its continental ambitions in view of the grater good that the initiative can bring to the entire region. If Turkey can come to terms by tempering its ambitions with the realism and pragmatism that were typical of its Roman and Ottoman history, it will not only become a key instrument in the development of this epochal strategy, but it will find ways to become instrumental to forge stable peace and prosperity across the regions, peoples, religions and resources of this pivotal area of the world.