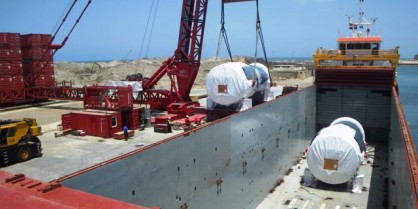 Coasters vessel freight to Burullus • Small fishing port turned into a transportation hub for Mega gas- and steam combined cycle power station.
The final push for a gigantic order: Until September, DB Schenker will be transporting a total of 100,000 tons with 400,000 cbm of freight to Egypt for Siemens AG, which is building one of the largest gas-fired power stations in the world. Burullus is the site of one of three Siemens power stations. Powered by natural gas, each plant has a capacity of 4.8 gigawatts, which will be generated by eight Siemens gas turbines and four steam turbines. This technology has been selected for its high efficiency.
The individual components include turbines, generators, transformers, and boilers, with single weights up to almost 500 tons. Each of the three power stations requires 248 of these massive components in total. 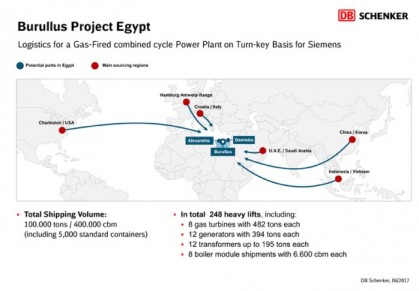